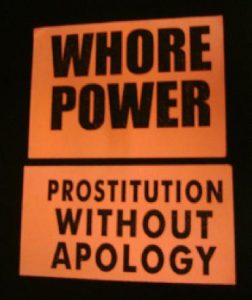 The protests of sex workers against unfair regulations in the past is unfortunately badly documented. But we know that for example in France from roughly 1300 onwards unofficial ‘queens of the debauched’ (reines des ribauds) sort of organized protests against the clothing regulations for ‘sex workers’. Their ‘guild’ is also supposed to have donated a glass stained window to the Notre Dame in Paris. (Het Vrije Volk, 14-6-1975).

In the twenties in the 20th century there was an initiative to start a collective in Germany. In 1919 the Hilfsbund Berliner Prostituierter was founded. In this way the sex workers protested against ‘reglementation’. (Waldenberger, 2012). They even had their own magazine, Pranger, which was published by Betty Gutmann but was forbidden in 1920. (Hamburger Echo, 8-1-1920).

The first ‘modern’ sex workers organization was founded in May 1973 in the United States: Coyote (Cast Off Your Own Tired Ethics). The real start of the sex workers movement in Europe is pinpointed at June, 2, 1975 in Lyon. Sex workers occupied the Church of St.Nizier, in protest against their random imprisonment. The movement spread all over France. (Mathieu, 2001).The French feminist philosopher Simone de Beauvoir rushed to express her solidarity. (Het Vrije Volk 14-6-1975). The French movement was able to secure the help of abolitionists, who fighted the unjust imprisonment of sex workers but stopped short at the fight for recognition. (Mathieu, 2001). The abolitionists fought against organized prostitution. In England the fight for household wages joined forces with the English Collective of Prostitutes, raising the issue of sex as un unpaid household work activity. In the United States a similar development took place. (Jenness, 1993)

In the 1980s sex workers’ movements burgeoned in many Western European countries and in Australia and in the second half of the 1980s in the so called Third World Countries, like Brazil, Uruguay. This had to do with the Aids Crisis, which offered sex workers an unique opportunity to do outreach, under the motto:’ we are not the problem, we are the solution to the problem.  In this way they assigend themselves a task in the safe sex campaigns. Irrespective of the policy regime, sex workers movements flourish in India, Bangladesh and South- Africa. Due to the political changes in Europe, Eastern European organizations joined the community. Now they communicate with each other via various internet communities.

The Netherlands: Sex workers’ organizations till 1985

Until the seventies of the previous century indifference towards prostitution ruled in the Netherlands. That changed when in the city of Rotterdam a problem emerged with the growth of the sex- industry, notably the window prostitution. Due to developments in mobility and new technical possibilities (8 mm films) window prostitution and the number of sex theatres had from the sixties onwards, increased spectacularly, much to the dismay of the residents of the Red Light Districts, especially in Rotterdam.

The local government proposed a radical solution: concentration of all sex businesses in one giant ‘council brothel’: an Eros centre, modelled after the German counterparts. To realize this, the lifting of the ban on brothels was a necessary condition. The Rotterdam local government started a strong lobby with the government for a change of the law. The Rotterdam government  expected that the ban on brothels would be lifted in the beginning of the eighties and continued the search for a suitable location for this Eros Centre. Every location suggested met with a fierce resistance of the surrounding neighbourhoods. Until the mid- eighties Rotterdam has continued its attempts to establish an Eros- centre, to no avail. The upshot was a time- and money consuming wishful thinking. The ban was not lifted until 2000.

The responsible alderman, Van der Have assumed that the sex workers would follow ‘their pimps’ and resign to being ‘housed’ in this Eroscentre. (various newspaper clippings 1979). This proved wishful and fact resistent thinking, since sex workers started to move out of the houses owned by their (pimping) husbands or partners, and moved from city to city to work in shifts, at the time a new development.

Politicians, nor the media asked the sex workers if they were willing to be concentrated in an Eroscentre to be. The first reference to their views can be found in a newspaper interview from 1979, wherein sex workers gave the telling response: Why did you not come sooner to ask our opinion? No, we don’t want to work in an Eros Centre. (Het Vrije Volk 13-1-1979) An organization from outside, the working group Prostitution of the movement Man, Vrouw en Maatschappij, (Man, Woman, Society), a progressive, emancipatory network, organized 70 sex workers to voice their opposition to working in an Eros Centre. (Het Vrije Volk, 24-10-1981). Due to the increased mobility of the women and the lack of formality of the organization, the ‘collective’ fell apart.

From 1979 onwards a small sex workers organization emerged: VIP (Very Important Prostitutes). It attracted enormous media attention and had a very eloquent spokeswoman: Violet. They ran a hotline and were supported by some feminist writers. It remained very small. One of its members continued the organization and focussed on street workers and advocated for instance free needle exchange.

The next sex workers’ organization was The Red Thread.