Atalantas, a selforganization of victims of human trafficking in the Netherlands

In 2000, an Eastern European woman came to work as a volunteer at the De Rode Draad, then the sex worker’s rights organization in the Netherlands. She was in what was then called the B 9 arrangement, which gave her a legal status as a victim of human trafficking. She wanted to do something, preferably together with other victims. Soon two other women turned up in the office of De Rode Draad who were in a similar situation. 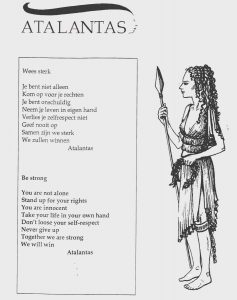 The next months they turned up in all sorts of debates about prostitution and human trafficking. Together they challenged the image of the victim as passive and little emancipated creature. This group decided to set up a self-organization to improve the situation of people who were in the same situation. Besides, they wanted to give other victims the opportunity to exchange experiences in a quiet and informal setting. For safety’s sake it was essential that the venues of  the meetings were kept secret. [I]I was present at the first meeting.

The initiators were all women who had been exploited in prostitution, but male victims and victims from other sectors were also welcome to join. In 2003, the organization for which they chose the name Atalantas, was a fact.

Atalanta is the name of a butterfly but also a character from Greek mythology. This Atalanta was an outcast royal daughter raised by a hunter. She could hunt better and run faster than any man. She was later reinstated into grace by the king but was forced to marry. However, she stipulated that her future husband had to be able to run faster than she herself could. In this way she was able to postpone the marriage for a very long time. A role model for the Atalantas women.

The Atalantas organization wanted to remain independent and not be just a project of another organisation. The initiative received a lot of media attention and also called the attention of politicians. Dressed in ‘power suits’, the women confidently entered all kinds of venues to debate with MP’s and ministers.

A well-known journalist donated a laptop. A religious organization and MTV also made a contribution. But this did not cover all the expenses. For example, information material had to be provided in their own house style.

A more solid financial basis could only be attained by applying for a subsidy for projects. Unfortunately, this was a major obstacle for the women, who had no experience with it. With the help of volunteers, attempts were made to meet the requirements of a project organization, but in the end they did not succeed.

NB: Atalantas was at the time the only self-organization of victims in Europe.