In countries like ours we have labour laws, there are rules and we have ideas about what is a good employer. This is the result of more than a century of political activity, of trade unions and a lot of court cases. But that is not the case in prostitution.

In the 2000 law reform, that lifted the ban on brothels it was assumed that this whole development, which took more than a hundred years in all sorts of industries, would also take place in prostitution. The sex workers would become part of the union and the employers would become regular employers. It was supposed to be as simple as that. The key to this being involvement of the trade unions in the sex industry. 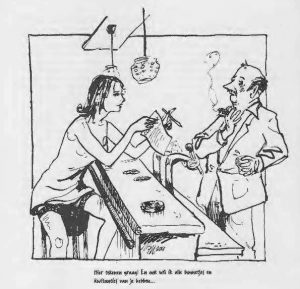 During the nineties the Red Thread had already contacts with one of the largest trade unions, the FNV. After 2000 this FNV took its responsibility. They helped sex workers to start a trade union. First it was part of the Red Thread. The FNV invested in the training of the education of Rode Draad workers to turn them into to trade union workers. And they helped setting up a trade union for sex workers, that would become an organization independent of Rode Draad, or be part of the FNV. Time would tell which organizational model would be most suitable. The idea was that FNV and the trade union of sex workers would start negotiations with organizations of employers in the sex industry. But there it went wrong.

The owners of (private) clubs and parlours had always been claiming  that the sex workers in their facilities were self employed, not employed. So sex workers could not get unemployment benefit, had no right to sick leave etc.  And of course, that was why the owners of the facilities did not have to pay social security. One of the reasons for this was the brothel owners‘ assertion that the exercising of authority was contrary to the sex workers’ right to sexual autonomy. And exercising authority was one of the foremost characteristics of being an employer.

But the tax office, who sensed that  the managers of brothels tried to avoid social security payments, observed that the owners did in fact exercise authority. They set working hours, they sometimes ordered the women to clean, they had all sorts of house rules and sometimes imposed a dress code. [1] Many legal battles ensued. Almost every individual brothel owner who was told that, being an employer, had to pay social security, went to court. This proved to be a time-consuming affair. The tax office won most court cases, but the brothel owners were not cooperative.

The resolution in parliament

In 2003, due to a resolution in parliament (Resolution Griffith, De Pater), the Ministry of Social Affairs was given the assignment to create clarity in the labour relations in the sex industry.  The two parties: sex workers (supported by the Trade Union and the brothel owners, supported by the MKB, an organization for employers of small and middle range companies, held meetings to reach an agreement. That worked for the draft contract for working as self-employed worker, but failed in the employer- employee relation. The tax office did not approve of the draft contracts and the deliberations were ended.

The brothel owners kept insisting that any exercising of authority was against the law, according to them even against the constitution. They thought it even an infringement of human rights. The Ministry asked an expert on labour relations, Klara Boonstra to clarify the matter. She wrote in her report that brothel owners systematically diverted entrepreneurial risks to the sex workers. She concluded that Dutch labor law made an employer-employee relationship possible in the sex industry, provided the sexual autonomy of the women was safeguarded. This conclusion was confirmed by the court  in 2005. The brothel owners considered this to be just a theoretical issue. They claimed no sex worker would want to work as an employee, because she/he would not jeopardize his/her freedom. But a labour contract could benefit sex workers: they would be paid during the long hours they have to spend waiting for clients.

Still the brothel owners were willing to discuss a draft contract: sex workers could be employed to perform tasks that did not involve sex: be present and welcome clients and to entertain them. Next a big discussion ensued: when exactly does the sex start?  At this point the sex workers and the brothel owners disagreed. The latter claimed that it started as soon as the client rang the bell of the facility. The sex workers on the other hand were of the opinion that the sex started as soon as the client touched them.

In the meantime it turned out that the Trade Union of the Rode Draad could not muster enough members to become an independent trade union and not enough members to become part of the big FNV. The trade union had a lack of funding. The government refused to supply funding since it did not consider it it’s task to finance a trade union. They were adamant that the members themselves had to muster up[ enough funding. So there was an impasse: the FNV withdraw, the trade union project of the Rode Draad was in serious trouble and the brothel owners did not budge.

The opting- in package

In order to put an end to the stalemate between the tax office and the proprietors, a system that was a hybrid of self-employment workers and employment, a kind of fictitious working relation, was adapted for the sex industry. In this system the money reserved for the tax office is deducted before the owner pays the sex worker. She does not pay social security but she also cannot claim the social protection rights that are connected with employment. In order to safeguard sex worker’s rights a ‘package’ of conditions was included. This concerned the right of sex workers to set their own working hours, to wear whatever they pleased, the right to refuse clients and certain sexual actions, the right to refuse to drink with clients, the right to get a receipt any time and the agreement not to hand over a percentage of extra services to the owner. The conditions were formulated in such a way the sex worker was safeguarded against the exercise of authority on sensitive issues. They were meant to prevent coercion in accepting certain clients, to perform unwanted actions, to prevent (small scale) economical exploitation and to guarantee the women that they did not have to spend more time in sexual services than they wanted.

This ‘package’ served to remedy a flaw in the system since the opting-in regulation was originally designed for situations where authority could not be exercised whatsoever. This is the case with preachers who are hired by a religious institution, with writers who are paid by publishers and with members of local councils. But the opting-in was never designed to cover up the exercising of authority in brothels. From the diary of the insider, the interviews and the reports of De Rode Draad (2012) we must conclude that most brothel owners violate the conditions of the package on most points.

–         Violation of the right to wear whatever one pleases. In one of the massage parlours the women are obliged to wear a uniform. There are also other dress codes.

–         The interviewees, the insider and de Rode Draad reported complaints about the receipts being too few and far between or even totally absent.

The interviewees, the diary of the insider and the reports of the De Rode Draad mention the fact that this right is often violated. Sometimes women are obliged to take turns at working in the weekend, are not allowed to leave before their shift is over or can not work only a part of a day.

This is the only item in the ‘package of conditions’ that does not lead to conflict and controversy. None of the interviewees complained about that.

The result is that sex workers are not satisfied with the working conditions and atmosphere in the massage parlours, clubs and private clubs.

All researches however, state that absence or leaving the job is an indication of a bad atmosphere. In clubs and private houses the women are not employees in a strict sense, but this absence or quitting the job may indeed be an indication of a good or bad working atmosphere. Sex workers tend to vote with their feet: if they don’t like a place they just leave. The upshot is that only measurable standard is the average length women work in the same place. All interviewed women said that a brothel owner/ boss who does not exercise authority is the foremost condition for a good work climate.

We also have some indications of how the behaviour of the management contributes to a bad working atmosphere. In some of these cases one might even wonder if this could be labeled a bad employer or a violation of labour law.  Apart from the problems described as endemic exploitation, the facts that directly influence the work  atmosphere are the placing of surveillance cameras and microphones.

Now the  brothel owners are becoming more and more powerful. One of the reasons is that the number of licensed facilities where women can work has decreased dramatically. Less than 50 percent of the facilities that got a license in 2000 is left. Then it does not come as a surprise that sex workers take resort to the internet.

This article is based on a lecture in Vienna (2013) and some results of the comparitive prostitution policy study. (Wagenaar en Altink, 2013)