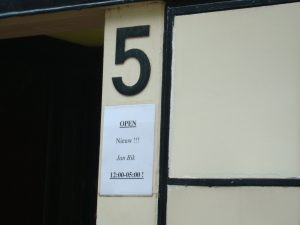 An address of a now closed sex club

The secrecy surrounding sex work is reflected in the poor statistics about people who are involved in it. How many sex workers, how many clients and how many facilities are there? No one knows exactly. Most of the time, people are just guessing. It turns out to be difficult to determine the exact numbers of not only sex workers, but also of sex facilities. The number of clients also remains a mystery. When they came into the picture as the most significant party in the fight against AIDS, researchers presented the shocking figure that one in five men Dutch men is a visitor of sex workers. But later it turned out that in the Netherlands, one in ten men regularly visits prostitutes; and one in five had ever done so somewhere in the past.

Another example, one regularly hears that the percentage of ‘forced women’ is 50-90%. All these estimates contain margins of error ranging from thirty to almost seventy-five percent.In quantitative research, an error margin of five percent is usually allowed. But apparently, in prostitution research, the presentation of vague figures is considered more acceptable than in other scholarly work.

The figures presented are always nice round and above all, large numbers. Numbers are systematically overestimated. This is not something specific for prostitution research, but characterizes every investigation into alleged or actual social abuses. With good intentions, authors try to put the abuse on the political agenda. They assume that large numbers carry more weight than small ones. A number of mechanisms are involved in overestimating the scale of the phenomenon. In the first place, there is sometimes deliberate exaggeration. For example, K. Schaapman and A. Asante (2005) claim that there are 8000-10,000 prostitutes working in Amsterdam. This is based on an old estimate from the Municipal Health Service.

Researchers and policymakers tend to repeat each other. In countless domestic and foreign publications on prostitution in the Netherlands, the number of 25,000 prostitutes working in Dutch prostitution is mentioned. Are there really 25,000 sex workers in the Netherlands? Has this always been the case? Does that figure never change? Why is it so difficult to estimate the number of sex workers?

At first, this was 30,000. This last figure is an estimate made by Vanwesenbeeck et al. (1989). Ex sex workers and  women who had done it temporarily were included in this number. This means that all former prostitutes, all people who have ever worked in prostitution, even when they had done it a few days are included in this number. Next this figure started to lead a life of its own, as being the number of active sex workers in the Netherlands. Later on, they thought that this was a bit toomuch, and then they reduced the number to 25,000 at random.

Indeed, there are no reliable figures on how many men and women work as sex worker in the Netherlands. Nevertheless, researchers quote the old estimate as being authoritative that there are 25,000 women working in prostitution in the Netherlands every year. This figure is curious because it will never be more or less, even though everyone claims that the market is growing or shrinking. We might conclude that large numbers are more an expression of a discomfort and moral anxiety on the part of the authors than a faithful representation of the empirical reality.