Registration in the Netherlands 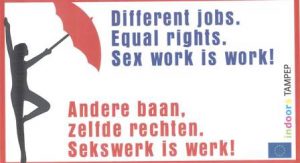 One of the big issues of debate now in the Netherlands is the registration of sex workers. The aim would be prevention of trafficking. In the past there have been attempts to register prostitutes, for various reasons. Did registration ever attain its goal?

In the old Rome system there was no special prostitution law. Its regulation was part of tax law, laws on marriage and criminal law. The prostitution regulations were meant as prescriptions for sexual behaviour. Certain women who committed adultery were confined to the category  prostitute. Women who were working as prostitutes, either as slaves or for some other reason, had to register with the socalled aediles. They were a kind of magistrates who operated as prostitution controllers, as we would call them in the Netherlands. These aediles could enter the brothels with an official permission, but always had to take other authorized persons to check if there were no unregistered prostitutes, or meretrices as they were called. The aediles could fine them or punish them with banishment.

The women had to apply for a licence, the licentia stupri, which would mean something like licence for debauchery or more precise: license for criminal intercourse of a man with a single maid or widow. Roman widows were not allowed to have sex. Widows could avoid death penalty for committing adultery by registering as meretrice). The aedile would give her a new name, prescribe her clothes and tell her how much money she was allowed to make. This enrolment in the register was for life. They were not allowed to marry.

One of the aims, especially in the period of the emperors was to make it possible to collect taxes from the  prostitutes. But there was another reason too. First of all the regulations were meant to distinguish them from the ‘matrones’,  the respectable Roman women. It was meant to keep them in their place, both physically and in  their social station. That is why they were not allowed to marry. Despite the harsh punishment for working as an unregistered prostitute there were more unregistered than registered prostitutes. The latter wanted to avoid the payment of taxes, and they could get out and marry.

In Mediaeval  Europe the authorities also tried to keep prostitutes in place by putting them in brothels who were placed outside the city walls or in the bigger cities in backstreets and dead end streets leading to the city wall. In many cities they were not allowed out of their ‘neighbourhoods’ during certain hours. In some cities they also had to wear a certain dress. This served to distinguish them from ‘honest’ women. They could not enter the ‘honest’ world. They were severely punished if it was found out that they had a lover who wanted to take a woman out of the life.

The role of the aedile was taken over by the bailiff or his assistants. The women were also registered and the bailiff had to collect taxes. Moreover he was in charge of the management of the brothel. He was the bookkeeper.

In large cities, in the Netherlands especially in Utrecht, independent prostitutes managed to ply their trade. The cities reacted by trying to restrict the locations where they could do that, only in very noisy backstreets. Still many incidents of illegal prostitution were recorded. Some women sought some privacy by soliciting clients in churchyards or churches or to seek some shelter from the wintry cold. That’s why the city of Amersfoort for example forbade women to be in a church with a man who was not her husband. Besides there was prostitution in inns.

But there were also some exogenic factors that threatened the registration system:

1. Wars. The movements of armies gave prostitutes an opportunity to ply their trade in a mobile way.

2. The rising popularity  of what we would call a certain wellness. In this period the bath stoves were introduced. Man and women could take baths together in a luxury environment.

All this changed due to at least two other external factors:

1. The reformation during which all prostitution was forbidden.

2. The scourge of syphilis, a disease unseen or unheard of in Europe before.

Still, prostitution continued, but official registration was not an issue until around 1800. It was the time Napoleon took control of large parts of Europe. Napoleon introduced this regulation with the explicit goal to stop syphilis.

The Netherlands came under French rule. According to this Code Pénal all prostitutes had to register with the police. After registration with the police the prostitutes received a red card with which they had to report to the police doctor twice a week. When they were found ill, they were locked up in a hospital. They could get the red card back when the police considered them healthy again. This system was applied in France for the first time in 1802 and in the Netherlands in 1810. At the first attempt to register the prostitutes in Amsterdam there were 500 prostitutes who registered. The Amsterdam head of police complained that not all woman could be registered and the real number of prostitutes in the capital was much higher. For fear of registration a lot of women quit the job, but re entered the job later, setting the number of registered sex workers at the comfortable round number of 700.

Parent Duchatelet, the first doctor to make an inventory of prostitution in Paris

When the French occupation ended, prostitution policy in the Netherlands was at a dead end. But again, there was an exogenic development that prompted prostitution policy. The first king, William the First, implored the ‘Staten’, the regional authorities, to adopt this ‘one good thing’ of Napoleontic Rule; the registration of prostitutes. He was worried about the incidence of std’s that could weaken his army.

Only the Hague and some smaller towns which were army bases reacted positively. In smaller towns there was usually just one brothel. But the larger cities feared that it would be difficult to track all the sex workers. The city of Amsterdam for example tried to stall it as long as possible. But that did not mean that there was no registration at all. The police did in fact keep a register. In 1839 it turned out that the police were lining their pockets with the registration fees and other contributions from brothel owners and prostitutes. When for example a prostitute wanted to leave the city, she had to pay six guilders to the police.

In the meantime prostitutes and brothel owners did what they could to avoid registration. Brothels were disguised as inns and bars.

The situation changed considerable due to the 1851 ‘municipalities law’  that gave municipalities a great autonomy. So every town could issue regulations. By then most towns did. In Rotterdam for example there was a special hospital founded for these women. The register of this hospital is kept. This register learns us that very few women were cured. This is no surprise, since only in the 20th century an effective cure was found.

In 1886 the criminal law was changed. A liberal member of Parliament, Van Houten, was worried about abuse of minors and involuntary prostitution. He introduced a new law, obliging brothel owners to state explicitly the nature of the business a new woman wanted to work. This had to be done in the presence of the major or a representative of the mayor. So the goal of registration shifted to prevention of human trafficking.

Did this work? According to the civil servant who was charged with this task it was a rather useless. In six months he saw 45 brothel owners and 197 women. Only two of them changed their minds after the confrontation but entered prostitution anyway after a few weeks. And most women were not as young as everybody thought.

The concern about trafficking was one of the reasons there was a growing movement to end this system of regulation. To cut a long story short: in 1911 a ban on operating a brothel was instituted.

As we know that did not stop prostitution. In the twenties in most large cities a new department of the police became operative: the vice squad. They registered prostitutes who complied because they did not want to have problems with the police. Pimps forced them to meet this demand of the police. But in the sixties and seventies a lot of women got rid of their pimps. In the seventies they could work safely in a new type of facility: the sex club. Sometimes the owner forced them to register, to keep problems with the police at bay. Until 1997 this institution tried to convince sex workers that they had to register voluntarily, for their own good. When asked, the only good that could come of it, was that they know who you are when you are dead…

Since 2008 the Dutch government wants to introduce registration again. The last two years the Dutch senate is debating on this. The goal that has to achieved is to stop traffic. But it is very difficult to prove that registration has an impact in the fight against trafficking. The the big issue is: the violation of privacy. In October 2012 this was an argument for the Senate to stall the law. To keep a register with very personal data, is subjected strict rules. The goal of this must be very well defined. And this is exactly the problem. For which problem is registration the solution?  Maybe we can learn something from history after all. First of all, sex workers have always resisted attempts to register them. It always gave rise to ‘clandestine’ prostitution.