On 27th of April 2017 the following book was published by Policy Press in Bristol: Designing Prostitution Policy: Intention and Reality in Regulation the Sex Trade, by Wagenaar, H., Amesberger, H. and Altink, S. 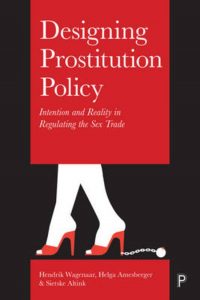 The abstract of the book:

This is one of the few books that explicitly focuses on the formulation, process and outcomes of prostitution policy. While the debate on prostitution focuses on broad regulatory regimes, the central premise of this book is that the outcomes of prostitution policy are in fact determined by local policy making. The book provides a detailed analysis of the challenges and pitfalls of designing and implementing prostitution policy in Austria and the Netherlands, with a focus on the major cities in these countries. The analysis shows that prostitution policy is challenged by the stigma attached to prostitution, the moral contestation around prostitution, the paradoxes of migration, as well as the inherent lack of data about prostitution. Locally we found that processes of regulatory drift and agency capture reversed originally progressive policy goals to result in a repressive form of regulation aimed at controlling and rolling back prostitution. These processes were strongly shaped by a dominant neo-abolitionist discourse that conflated prostitution with trafficking. Neo-abolitionist inspired regulation had the effect of ignoring the considerable labour exploitation in the domain of prostitution and contributed to the erosion of sex workers’ human rights. The authors propose to replace ‘fighting trafficking’ by ‘fighting exploitation’ to establish improved working conditions and labour rights for sex workers. Drawing on experiences from around the world, the authors argue for collaborative policymaking as a strategy for an effective and humane prostitution policy. That implies entering into a dialogue with, and the inclusion of, sex workers advocacy organizations in the formulation and implementation of prostitution policy.

Video’s on the book: