Prostitution laws in the Netherlands

The Legal Framework for prostitution in the Netherlands has not changed since 2000. On the moment of writing this report (2012) the Law Regulation 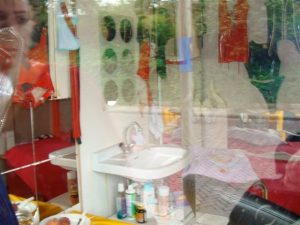 A room for prostitution in Deventer, 2008

Prostitution iand its successor is still in 2013 under debate in the Dutch senate. I

A  law that is not specific for prostitution,is  the Bibob, (Public Administration Probity Screening Act) It is in force since 2003 and  is mostly applicable to  cafés/ bars/ restaurants gambling arcades and the sex industry. In Amsterdam however, it has mostly been implemented for the sex industry. (Gemeente Amsterdam, 2009) This law had a considerable impact on the prostitution facilities. Licenses for brothel owners were withdrawn if they could not prove sufficiently that their way of financing was upfront and legal.

The Municipality Law of the year 1851 is very important in understanding the autonomy of Dutch municipalities in making regulations in respect to prostitution. They can introduce regulation as long as this is not contrary to national law. This explains why some (small) municipalities don’t have any regulations at all and other have some stricter regulations. For example the city of The Hague introduced in 2012 a rule that managers of facilities had to screen their prospective workers if they work voluntary and the city of Utrecht introduced mandatory registration of the workers in the largest Red Light District. Besides the city obliged them to rent the window on a monthly basis. Both in Utrecht and Amsterdam the municipalities kerbed the possibility to work in the windows two shifts (2 x 6 hours) a day.

Provisions for victims of human trafficking

Since 2005 the Dutch anti-trafficking law is in line with the Palermo Protocol and does not concern itself exclusively with sexual exploitation. Victims can apply for a temporary legal status, so they could avail themselves of the services of a lawyer, temporary housing, social welfare and medical support. They are also granted a three month consideration time for the decision to report their traffickers. After having the B 9 status for three months, the trafficked person can apply for a job outside prostitution. They have a legal residence status in the Netherlands as long as the court case lasts. If this is longer than three months or the court case results in a conviction they get a permanent residence permit. The four major cities tackle trafficking in a chain management system in which the social support agencies participate.

Most managers of facilities who were affected by the Bibob law challenged the rulings of this law, sometimes with success. This meant that they had to close less windows than was decreed in the first ruling. One of the managers of the windows in Utrecht protested in court against the mandatory registration of sex workers. He lost the case.

In Dutch crime registration the professional occupation of victims is usually not listed. For example, when a plumber is a victim of pickpockets, we won’t find that in the crime statistics. Sometimes professional associations like those of taxi drivers or of medics might keep records of the incidence of crimes against them. In the case of serious violence against or murders of sex workers these incidences are highlighted in the media.

There is however one type of crime against sex workers that is subject of specific data collection and that is human trafficking. Two organizations keep track of the incidence of traffic: Comensha and The National Rapporteur on Trafficking in Human Beings and Sexual Violence against Children. The latter yearly publishes lengthy reports full of statistics about court cases, perpetrators and victims. Their estimates of the number of victims  is based on the number of cases that are brought to court or are in the investigation phase (about 450 in prostitution in 2009). (Nationaal Rapporteur Mensenhandel, 2010) These reports are published on their website which has an extensive section in English. Not all victims report the traffickers to the police. Besides all sorts of officials, outreach organizations and clients may also suspect that some sex workers are victim of trafficking. That is where Comensha (Coordination Centre Trafficking comes in. Comensha gathers data from these sources. Recently this organization published the figures on 2012. (link) According to Comensha  2012 incidents regarding 1177 women  and 37 men were reported who were possibly victims of traffic That is supposedly an increase of one third compared to 2011. This rise was mostly the result of an increasing involvement of the border police (military police or marechaussee, who stopped suspected victims at the border. The figures of Comensha are open to debate because they concern possible suspects seen by people who different views on how to discern cases of traffic.

NB: In the Netherlands a trafficker who recruits women with promises of a loving relationship are called loverboys.