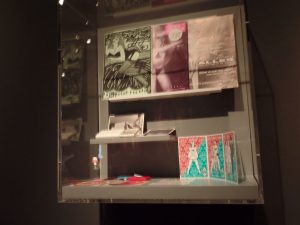 Showcase of the Red Thread in the Amsterdam Museum

‘Unfortunately we can’t give you a receipt for the ticket. The till is out of order’, was the first thing we learned at the Red Light Secrets Museum when we visited it in 2014, right after its opening. It was the only realism Marianne Jonker (ICSRE, initiator of the Platform, later Swexpertise) and I could encounter at our visit. Realistic, because sex workers would complain about the reluctance of the managers to give receipts about the real rent paid.

Though well designed the exhibits were depressing. One room had an installation where you could experience sitting behind the windons when all the people pass by. One finds oneself in a gloomy room, looking at graffiti and hostile faces in the night. Posters with hackneyed ‘sad stories’ covered the walls. The museum wants to bring home to the visitor that prostitution – especially in the famous Red Light District is inseparably linked to ‘coercion’. But what is worse: the information provided is not reliable. The makers of the exhibition repeated for instance the much quoted percentage that 10 to 90 per cent of the sex workers is victim of trafficking in humans. Every scholar would however agree that such a large margin of error is characteristic of unreliable figures.

Clients are depicted as losers who tend to forget their dentures or as hypocritical teachers who leave their school diary behind. In an attempt to counter the sordid image of the Red Light Brothels the designers built a luxurious bath as part of a working- room in the window. But when we visited the window areas all over the country we have never seen such a bath in the window rooms. We do have seen them in upmarket gentlemen’s clubs. Clients won’t come to a window brothel to pay through their nose for a luxurious bath.

Disappointed we left this show- box posing as a museum. On our way out were handed a brochure. This proved to be written by a very fact- resistant person. While reading it we stumbled upon two major mistakes. First of all, a woman, the spokesperson of Geisha, a sex worker’s organization –  then on the rise, and by now (2016) fallen –  claims to be in the process of establishing the first trade union for sex workers in the Netherlands ever. But everybody – except the authors of the brochure- knows that there was that in 2002  the Red Thread founded a trade union, in cooperation with the official trade union in 2002.

The brochure also offers some ‘legal’ information: ‘Prostitution is officially legalized in 2000 in the Netherlands.’ Wrong!!! Prostitution has been legal in the Netherlands since the days of Napoleon. Only brothel keeping was legalized in 2000. And the brochure contains some more dubious statements. Why? We already know the answer. One of the characteristics of prostitution policy as morality policy is that laymen claim to have sufficient information to form an opinion. Then it does not come as a surprise that a self- appointed expert writes a brochure without consulting the real experts.

What a waste of space, time and money. But where to get reliable information on prostitution in the Netherlands? Go to the Prostitution Information Centre on Oudekerksplein or look at the exhibits in the Amsterdam Museum.