A very short history of prostitution in the Netherlands

In Europe the professional and organized prostitution dates from the late Middle Ages. From this area stem the first documents about this phenomenon in the Low Countries. Several authors, (Van de Pol, 1996, Volmuller, 1966, Stemvers, 1985 and Meyer, 1989) mention the cities of Utrecht and Den Briel (also called Brielle) as the first Dutch cities to have issued decrees to regulate prostitution. [I]Not Amsterdam, which was at the time a small town Den Briel ordered in the twelfth century the destruction of the only brothel within the city walls. It was to be replaced by a new brothel outside these city walls.

In these cities with a ‘prostitution policy’ the local government was as rule responsible for the management of these brothels. The ‘common women’ had to comply to certain rules. One of the rules in Den Briel was that they had to be outside the city walls after sunset. 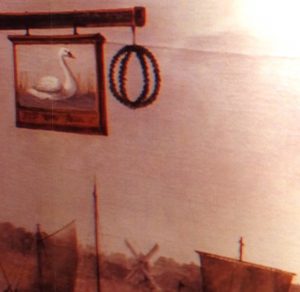 A painting in the history museum of Den Briel. In the Middle Ages a sign with an animal was an indication that the building was a brothel.

The authorities however, could not prevent the ‘common women’ from working independently outside the brothels. These women wandered about and sometimes joined the mobile armies. Another source of independent (and illegal) prostitution were the bath stews, where they could consort with men.

In the Netherlands, especially in the northern part, the Eeformation meant an end to the regulated tolerance of prostitution. Of course, prostitution did not disappear, but went underground. It was not long before the authorities of larger cities introduced regulated tolerance again. But the local governments refrained from acting as brothel managers in this era. The private brothel owners had to comply to certain rules. They could for instance only operate in designated areas. Until the 18th century the brothels were mostly managed by women.

During the French occupation (1810-1813) a regulation modelled on the French system was introduced. This meant that the public women had to be registered by the police and were forced to undergo a regular medical check- up for venereal diseases. When infected, they were not allowed to work but had to be confined in a hospital. After the French soldiers had left, a discussion arose whether the Dutch should continue this registration and medical monitoring. King William the First was all in favour; he thought it would keep the soldiers in garrison towns healthy. At first most local governments – with the exception of The Hague- were reluctant to comply to the King’s decree. But after some deliberation most garrison towns developed a local policy with registration and mandatory medical check-ups as constant components.

But in the last quarter of the 19th century opposition arose against these regulations. First of all, its effectivity in the struggle against sexual transmitted diseases was questioned. After all, an effective cure with the help of antibiotics was still decades away. Orthodox Christians challenged the idea that the state should facilitate vice. They teamed up with women’s organizations who fought white slavery.

These groups gained momentum and succeeded in convincing the government. In 1911 brothel keeping was penalized. But prostitution did not disappear. Far from it. It became more visible and the sex business expanded during the seventies. Municipalities felt the need to regulate it, but could not. In view on the ban on brothel any regulation would be considered a furthering of prostitution. So, in the early eighties it was argued that this ban on brothels should be lifted.

At first the repeal of the ban on brothels should serve the purpose of a good regulation of prostitution. But in the second half of the nineties it was also considered an instrument to improve the working conditions of sex workers.

On the first of October 2000 the law reform came into effect. In some ways, the situation of sex workers improved, but not enough. The then government saw it as a case of private or civil affairs. It did not feel the need to act on the lack of labour rights and left sex workers in the lurch. Since 2008 a more repressive attitude towards sex work became ‘fashionable’. A more repressive act was drafted but still has to pass the Senate  (March 2017).

A more detailed analysis of the situation after 2000 can be found in Wagenaar, H., Amesberger, H. en Altink, S: Designing Prostitution Policy, Intention and Reality in Regulating the Sex Trade, published in April 2017 by Policy Press, Bristol

Click here for further information on the used sources.