The time: November 1997. In Frankfurt in Germany a conference is held on sex work organized by sex workers’ organizations. Allies, that is to say non- sex workers could attend if they wear a yellow badge with the text ‘Not a whore’ Nicht Hure, but they were not allowed to speak. [i]

Hansje Verbeek (1996) describes the aforementioned procedure as a reversal of the whore stigma. This means that the non- sex workers are in this case the victims of stigmatization and are stigmatized as outsiders. In this case the sex workers constitute the in-group. It also meant that sympathizers – outsiders- could do no more than contribute their expertise to the self-organization, where the true experts could be found. (Verbeek 1996) This behaviour is understandable because sex workers themselves were often left out the debate on sex work. Especially in the past, policy makers tended to see welfare workers and scholars as the very spokespersons of the sex workers. Nevertheless, those advocates were sincerely attempting to defend the rights of sex workers.

In the beginning of the eighties the scholar and activist Gail Pheterson had come to live and work in Amsterdam. She had gathered a group around her who concerned themselves with sex workers’ rights. Some of these people knew each other from a seminar in Rotterdam where an international network against trafficking in women was founded. Once a month, on a Sunday they met at Gail’s place in the Zocherstraat, Amsterdam. Sitting on the typical for the era bulrush mats on the floor, information was exchanged and plans were forged. 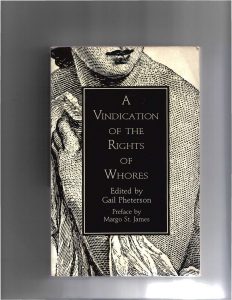 The book presented on 9th of november

Gail became the partner of Margo St.James, the driving force behind the American Coyote (Cast Off Your Own Tired Ethics), one of the first sex workers organizations in the world. Margo often came to Amsterdam. In the meantime, a of group sex workers had formed a rap group to share their experiences. Margo and Gail stimulated them to found a self-organization – what they did – and called it The Red Thread.

The Red Thread had hardly settled in when Gail and Margo came up with the idea to organize a World Whore Congress. And so it was done. The first Congress took place in 1985. After the Congress the women from The Red Thread and their allies gathered in Gail’s place to eat spaghetti and draft a new version of the Charter of the Rights of Whores and to issue press releases. (The author of this blog was also present)  [ii] The allies, mostly people who participated in the Sunday afternoon meetings had united under the name The Pink Thread. The ‘pink’ in the name referred to the broader struggle for self- determination like gays had fought for. Very soon, in 1986 there was another World Whore Congress, this time in Brussels where the Pink Thread women kept a low profile. Of course they could not vote. (folder).

What moved the then feminists and activists to join the Pink Thread? In the first place they deemed it important that sex workers, at the time they used the term ‘whores’ , should have their voices heard. They were also outraged with the treatment of whores by official institutions and the authorities. They also protested against stigmatizing laws. But a deeper felt motive to embrace the ‘whore struggle’ lay in the divide between good- Madonna’s- and bad women- whores-, which affected the lives of ALL women.

The struggle focused on the bridging of the divide. One of the questions raised was: what was so bad about whores? Well, unlike the typical mother they (usually) worked outside the house. It should be realized that at the time it was not so common for women to have a job or an income of their own. Next whores did not have sex for the (sole) purpose of procreation which had to be restricted to marriage. In this respect whores became icons of resistance to traditional norms on sexual behaviour. Whores also made sex an activity oudside the privacy of the home. Besides the whore was a role model for sexual autonomy and self-determination. In doing so she automatically challenged the self-evident heterosexual norm. The statement was that as long as bad women, women with deviant sexual or social behaviour were set aside as bad women, the process of emancipation is not finished.

This whore- madonna dichotomy was a subject in publications by Gail Pheterson which became classics. Gail did not restrict herself to publishing. Together with Martine Groen she organized in the women health center De Maan a ‘bad girl rap’ organized along the principles of co- counseling. In practice it meant that a non-whore went into a dialogue with a whore to find out what they had in common.

The Red Thread puts the Pink Thread to the test

The Whore- Madonna dichotomy was quite clear, in theory. But to what extent can a non sex worker really identify with a sex worker? The Red Thread persisted in the idea that The Pink Thread was a group of outsiders. This unease was translated by the Red Thread in a brilliant and disarming joke.

The Pink and Red Thread communicated with each during turbulent meetings, sometimes the scene of heavy conflict. But usually the chair, mostly Marjan Sax (the founding mother of Mama Cash) managed to restore the peace. One of the meetings between the Red and Pink Thread was on 9 November 1989. Gail launched her book on that memorable day, when on coming home we heard The Wall had fallen. By the end of 1990 the meetings of the Pink Thread were not well attended any more. In 1991 the last meeting took place at the house of Marjan Sax. No problem the organization was dissolved in a festive way.

Activities of the Red Thread

The Pink Thread did not limit itself to organizing meetings. It organized working groups. One of the members of the Health Working group, the general practioner Marjo Meijer actively sought the public arena to prevent that sex workers were blamed for the spread of the disease aids, then an emerging problem. This group stressed the high incidence of condom use of sex workers. They also issued a sticker for the women who worked behind the windows. This sticker can still be found on the windows in the Red Light District. Nel Willemse organized a national network of lawyers for everybody who was involved in prostitution. She organized a very well attented meeting in Krasnapolsky hotel. [iv] Besides the Pink Thread also established contacts with politicians and police officers. The Pink Thread has unlike the Red Thread never been a legal person. There was no spokesperson. The media always knew which Red Thread person to address on what issue. As a national organization the Pink Thread had never applied for funding. However, some local departments got a grant from municipalities.

Who were the Pink Thread Members

Apart from Gail – later professor Pheterson-  Marjan Sax was a prominent member of the Red Thread. Thanks to her Mama Cash we also have the  Red Umbrella fonds. Some of the Pink Thread members made a career as a scholar in the field of sex work. Some became university professors. Lucie van Mens became a leading expert in the field of aids and sex work. (She died on MH 17.) Jan Visser published the Profeit Research and was later the managing director of the Red Thread. Now he is still active in the sex workers rights movement in Germany. The women of the Nijmegen branch of the Pink Thread, had already established a name in the fight against trafficking in women. (Alide Roerink and Nelleke Vleuten). They were involved in the later Foundation against Traffick in Women, now Comensha. At the time the idea was that trafficking in women was an infringement on the rights of sex workers and should be fought. Quite a few former Pink Thread members are now part of the organization Seks Werk Expertise, a (digital) platform to fight discrimination of sex work. (In the Hansje Verbeek book on the Pink Thread I was described as a lazy writer.)

In 1997 the sociologist Ron Weitzer visited the Red Thread. He was working on a publication about sex worker’s organizations. He claimed that Coyote – the sister organization of the Red Thread- had failed due to lack of funding, new members but most of all of powerful allies. During his visit at Red Thread he wanted to know what in these respects was the state of affairs at The Red Thread. He was surprised to learn that leading feminists (former Pink Thread members) were still involved with the Red Thread and that it was in close contact with politicians and had a good relationship with the police.

But all this was to change. When I met him again in 2014 I had to inform him that the Red Thread had ceased to exist.